I needed to get home. It was nearly midnight and he would be waiting up for me. My hair was no longer down and playful the way it had been when I had first arrived.  It was pulled back in a messy bun, mirroring the way I felt inside. The last few hours had been filled with an effortless passion that I would not soon forget. 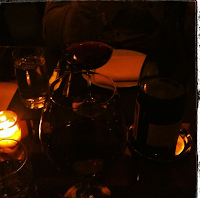 It woke me up inside and made me feel guilty from my head all the way down to my toes. It wasn’t right feeling this way. I was married and married women weren’t supposed to stay out this late with other men.  I knew if I had too much to drink, I wouldn’t be able to resist the temptation that was in front of me. And sure enough, I wasn’t. One by one my walls came down and before I knew it, I was putty in his determined hands.  I would leave that night forever changed by his persistence. He was willing me to unravel. Every time he reached for my hand, I reached for my drink. It was a subtle game of cat and mouse and by all accounts he was winning because with every sip I took, I wanted him more.

He had a way of making the most mundane of topics sound like the most exquisite subjects around. I found myself sitting with my hand under my chin, gazing at him as though he had the secret to life in his eyes.  It was when he got up from his bar stool that I was brought back into reality. He firmly placed down his Scotch, told me not to go anywhere, and winked. It was then that I caught his wedding ring in my line of vision. He was married. I was married. I couldn’t help but wonder... if this was so wrong, why did this feel so right?

He casually strolled to the restroom, looking back once. His gaze haunted me and brought out a part of me that I had hidden from myself for far too long.

I recognized that look.  It was one I had gotten as a young twenty-something from men in the office. Those men were often older and in power positions. They knew how to command rooms and essentially, women. At the time I didn’t read much into their advances. I was young and fearless, and with that came an outspoken manner that I would not currently defer to in my thirties. My twenty-something counterpart had a lot of sass.  I was cornered once by an executive who was nearly thirty years my senior, by the water cooler of all cliché places. It was my first “real” job as a greeter at a local bank in Ridgewood, New Jersey. He asked if could buy me the turtleneck I had on in every color, commenting that I should wear it every day because it accentuated all the right parts. I told him I would do both of us the favor of gathering all garments I had that resembled the turtleneck and would then carefully, burn them.

This of course kept him coming back for more, which taught me something very valuable. Men like that may have had power in the office, but I knew that I had the ultimate control over the situation. Being a woman comes with this kind of influence. Our bodies allow us this command. It’s a genetic advantage all women are born with and it allows us to use the power of suggestion to our advantage. It was then that I realized that I was using this same influence over my bar mate and knew that if I was going to maintain any semblance of my marriage I would have to turn it all off….

So when my gentleman friend came back from the bathroom and placed his hand over mine, I looked down at his hand and shook my head.

“Is there a problem?” He questioned, searching my eyes for the answer.

I reminded him that we had people waiting at home for us.

Now a bit more brazen, he put his arm around my waste and reminded me that if I loved my husband at all I would be home in bed with him already.

“You’re right. I could be in bed with him right now. Would you kindly call a cab for me?” I said dismissing his persistent stare.

“He hasn’t called for you once,” he continued, baiting me with his blue eyes.

I pulled out my phone and looked up at him seductively while I texted my husband, “I’m on my way home,” I typed, never taking my eyes off him.

Reaching for the back pocket of his perfectly stained Guess jeans my man friend pulled out his phone and typed, also while looking at me. “Not before I have my way with you first.”

With that, he grabbed the back of my head and pulled me in for a kiss. My defenses were rendered useless. I found myself enchanted by the way his tongue delicately brought my lips in for more. His kiss was more than I bargained for and it left my whole body weak.

He pulled away just long enough for me to breathlessly utter, “Have you had your way with me?” He dove back in, kissing me again. There was no time for resistance, only time for incessant “Yeses” from my body.

He abruptly pulled back, took out his phone and typed again.

A text was delivered to me moments later, “I’m not quite done yet, come home NOW.”

Before he could grab me again, I motioned to the bartender, “My husband and I would like to close out our tab.”

Minutes later, I was standing in the light drizzle beside my date who was in the process of hailing us a cab. The rain felt like a necessary reprieve from the heat that we had created inside the pub.

As if he had read my mind he uttered, “Don’t let this simmer you down too much, we have a bottle of Chardonnay at home, no kid in the next room tonight and brand new sheets to mess up,” he said, running his hand down my lower back.
The lesson here folks is that having an affair is totally kosher……when it’s with your spouse. Sure, he and I are still in the prime of our lives. It is still however absolutely necessary to give your marriage a little boost after you have children.  Because trust me, all of those messy baby diapers, running noses and late night visits from a toddler hurdling herself into your bed late at night (right smack in between you and your partner) can certainly interfere with the spice in your marriage. And if you are lucky like us, the added bonus of such a rendezvous could also produce another family member. Yes, it’s true; our second little girl was conceived on a hot, steamy Madison-free night. I can just hear my daughters screaming, “Ewww,”  twenty years from now while reading this. Maddie, at least you can wipe some of the yuck off you just by knowing you weren’t in the next room while your sister was being created. I’m literally chuckling as I write this, knowing how much this will gross you both out. You can accuse me of a lot of things as a mother, but you can’t accuse me of being dull.
So, just like that, we are due to be a family and four come March 2017.

And, just like that, this blog will now be lessons for my two little divas princesses instead of just one. Your father has given me the greatest two gifts I could ever ask for. I would therefore say our affair is one worth continuing…
Xoxoxoxo,
Mommy Dearest
A Little Love. 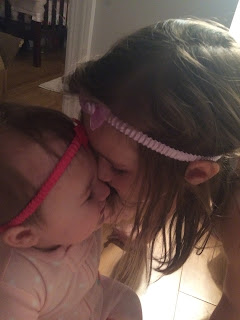 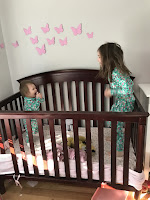