When I didn't hear her immediate reply I shouted over the counter again, "Mooooom."

"Ok, Lungs, I hear ya. I'm not deaf," she popped up from the couch in the living room. My sisters and I had the habit of yelling for Mom before we even looked for her. I'm sure it was music to her ears.

"Get under the light," she ordered.

"It's still greasy," I whined. Mom ran her hand through my hair with a puzzled look on her face.

She rolled up her sleeves, "you must not have washed it correctly," put your head in the sink. I hesitated and went to protest...

"Hop to it," she interjected.

My sister Kari came into the kitchen to steal another piece of Entenmann's Chocolate Chip Crumb Loaf Cake, it was her favorite and it in no way interfered with her perfect figure. "How many times have you washed your hair now?"

"Three," I groaned from the sink.

Kari laughed, "Are ya sure you aren't washing your hair with butter?"

"Ok, comb that hair out and dry it. It should be fine," Mom said, wrapping my hair up in a towel.

It was the middle of the summer and I was a thirteen-year-old diva with a very demanding social calendar.  I needed to be ready so I could head to the movies with my friends after I ate dinner, but my hair was not cooperating.  Every time I dried it, it looked more oily than it did the time before.  I grabbed my comb, styling brush and the best hair dryer in the house — my mother's of course—and headed to the big mirror in the dining room to once and for all dry my mop the right way.

My comb may as well have had rockets coming out of it the way it slid swiftly through my hair and out of my hand in one motion.  I touched my hair and cringed.  It not only felt extra slick, but it also felt extra heavy. It was like there was a wig over the top layer of my hair. Hoping it was just a figment of my imagination, I flipped my head over and started the blow dryer. After about three minutes I noticed that my hair was becoming harder in certain spots.

I flipped my head up and saw a reflection of what can only be described as the female Edward Scissorhands staring back at me in the mirror. It looked like I had put my finger in a socket. Pieces of my hair were literally standing in the air.  I couldn't pay for hair styled this perfectly sinister.  I swear time stood still while I stared in stunned silence at the bird's nest that rested on top of my head. Instead of the usual scream for Mom, I briskly walked into the kitchen where she and my sister were chatting while finishing up dinner.

My sister caught sight of me first, "Mo, Mom," she managed to get out before her laughter took over her.

My mother turned from the stove and dropped the spatula, "HA," was Mom's signature sound before she really started to laugh.

I didn't find this funny. I was scared to death my hair was doomed to be this way forever. I was a very rational preteen obviously. "What are we going to do?" I very seriously asked, hands on my hips, hair standing on end.

Kari and Mom stood there laughing for what seemed like an eternity.

Mom pulled herself together, walked over to the linen closet and questioned what hair products I had been using. I told her that I was using the same Shampoo coupled with a new spray-in conditioner Grandma let me take from her house. I figured it would be quicker using a spray- in considering I was on the go often. We'll save that fact that I was completely out of touch with reality for another post.  "On the go" is schlepping a one-year-old to and from daycare while somehow managing a 40-hour work week.  Yes, that little preteen needed a swift kick in the ass. Hindsight is twenty/twenty after all, people.

Mom raised an eyebrow and asked me to show her the bottle of spray-in conditioner that was saving me, "all this precious time."  I picked up the purple and white bottle that clearly read CONDITIONER on it and proudly handed it over to my mother.

She then had my sister and I hold our forearms out for another spray, "What does that smell like?"

It smelled like evening baseball games and barbecues. It brought me back to the beginning of summer with late night horseplay on the beach and night games of Manhunt around the neighborhood with friends. It was a perfume-like odor mixed with another scent.  An unmistakable scent. This aroma could ward off the tiniest of creatures. It was a fragrance I was not too thrilled to be recognizing at that moment.

In unison Kari and I said, "Skin So Soft."  Which was Avon's version of bug spray.

My grandmother had apparently filled an old bottle of conditioner with Skin So Soft for some reason and trust me, my grandmother was not senile. She may have kept expired medicine in her cabinets for "just in case" circumstances and may have tried to stuff our bellies with meatballs when we were already too full to fit another, but this woman was not senile. This one slipped through the cracks somehow.

It took two nights in with the family and four shampoo treatments to get my hair back to normal. I wasn't happy that I was stuck home while my hair sorted itself out, but those were two of the best nights of that whole summer. We had a bad thunderstorm come through one of those evenings, which made watching a movie all together in the living room that much more cozy and comforting.  Jiffy pop and warm blankets accompanied our movie viewing while lightning and thunder provided our backdrop.

I learned that sometimes being forced to be with your family isn't the worst thing in the world and that taking the easy way out isn't always the best way. It's like the old saying, "pain is beauty." Rushing around and using a spray in conditioner in that situation ended up causing more grief than it was actually worth. Take for instance the struggle every morning to get  my daughter Madison's hair styled for school. Never in my life did I think that putting someone's hair in pig-tails would turn into a science experiment and the sad part is I find difficulty being the control. I swear you can lose your mind over a proper placement of a barrette. This especially when your almost two-year old decides she would rather rip it out and throw it across the room than leave it in and look like a normal kid whose parents actually care about her.  The mornings that we are rushed are far less rewarding than the mornings where she sits and happily watches her Sofia the First show while I move in for a sneak attack on her hair. Who knows, maybe it's playback for all the heart ache I gave my mother. I mean I used to tap dance while she tried to curl my bangs. Could you imagine? Curling a four-year-olds bangs is hard enough, but while the kid is flapping and jigging around? Nearly impossible. Needless to say I went into my Pre-K 4 picture with a burn mark on my forehead and I had only myself to blame.


And so, to my little barrette-flinging diva, I implore you to allow Mommy to do your hair. Let me put it in bows, headbands and neat little ponytails. You'll be much happier when you look back at pictures and see your round little face with grey-blue eyes instead of a round little face covered by a heap of hair. I can't help but think of what your MeMa always said to me growing up, which was, "I  hope you have one just like you!" Well, Mom, I think it's fair to say that I sure do.  I plan on stocking up on bottles of Skin So Soft because you never know when a little girl may need to be taught a lesson you may need bug spray. Hey, if you can't have a little fun as a mother, what's the point? =)

To my two little pumpkins during this Halloween season,


I have a few spooky stories that do not begin with "it's a dark and dreary night," nor do they end with some crazed headless demon roaming the streets in pursuit of innocent townspeople. I can promise however that they will make the hair on your arms stand at attention. These stories are the reasons why I do not completely denounce psychic mediums because sure as I am alive these things have happened to me.
For Volume 1, let's dive back to 2006 when I was a young, impressionable twenty-five-year-old taking on the world of publishing one pharmaceutical trade show at a time.  I'd stand proudly at our booth and hand out our most recently published magazines, feeling as though I was contributing to the common good.  I hoped that the health care professional receiving it would reap the benefits of our cutting- edge advice and breaking news on the latest pharma technologies. We would save lives, I was sure of it. …
Read more

I apologize for not keeping up with these posts. My tardiness is however a result of something wonderful (I hope!)... I have been writing a book. You know, in between potty training, soccer mom chaos,  work and sleeping, oh how I love sleeping, I have been focusing on the novel that I have been trying to complete for years.

I will look to write a post by the end of the summer for sure! 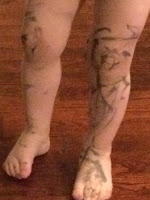 I walked into the boardroom just in time for the presentation to start. The Studio Director winked at me in relief while the Account Director, never missing a beat, introduced me to our potential new clients. Somewhere in between our handshakes and awkward small talk it hit me... I only had eyeliner on one eye. While this is seemingly better than say, having my fly open, it's not exactly a confidence booster before presenting to a group.

While my colleagues spoke, I discretely dug into my Mary Poppins bag of tricks for a mirror to at least assess the situation. Two pacifiers, a bib and a Fourth of July noise blower passed my line of vision before my index finger met the pointed edge of the baby nail clippers. I jerked forward just at the same time the Account Director passed the presentation my way, making me look over eager and slightly jittery.

I couldn't decide if the fact that they were a cosmetic company made it OK for me to have half  "my face" on. I mean if t…
Read more